John Stuart Mill once said that, ‘That so few now dare to be eccentric, marks the chief danger of the time’ He really wouldn’t have said that had he known the restaurant scene in the 21st century. Restaurants with unusual themes and ‘rules’, are ruling the roost, and are turning out to be hot favorites of people across the world. Their USP, as obvious, lies in the unconventional, with restaurants going for horror or space themes, quirky locations, performing staff, avante- garde technology and other new concepts in different areas.

Here’s a look at some of the eateries that have made ground- breaking progress in the hospitality field, with their unique features:

Indian literature and culture always had a penchant for the supernatural, and every child has definitely heard at least one story featuring a chudail, vetaal or tantric during his/her lifetime. Then how could the Indian hospitality industry remain far behind? The New Lucky Restaurant provides its share of spooks through the medium of its location-It is located in a graveyard in Ahmedabad (YES, A GRAVEYARD!!!). This restaurant which specializes in tea and, in soft rolls that are to die for (pun very much intended), started off as a tea stall catering to people who came to pay their respects to their ancestors, and slowly expanded into a well known establishment. The owners consider the deceased to be their lucky charm and pay their respects to them daily.

India is not only known for its association with mystical stuff, but also for its culture of hospitality, where the guest is treated equivalent to God (Athithi Devo Bhava) and is served selflessly. Seva Café in Ahmedabad focuses on this very aspect of our culture. The concept of the café is basically ‘gifting a meal’ where a unknown diner, who has eaten before you pays for your meal, and you are requested to pay for another anonymous diner. The idea, as the café’s website suggests is to extend the concept of athithi devo bhava to greater levels, whereby each guest is revered and is treated as God. It makes us realize that it is not only the guests at our house who should be treated royally, but the same courtesy must be extended to unknown people as well.

In the 21st century, with people having an instant coffee attitude to everything, one needs to add speed to every aspect of life. This (or the idea of kidnapping your clients :P), could very have well been the idea that came to the minds of the people at MoistClay Entertainment and Media Pvt. Ltd who conceptualized  Hijackk Restaurant, which is a mobile restaurant- to be specific, it’s a restaurant on a double- decker bus. The bus, which operates in Surat, Ahmedabad, Chennai and Rajkot, allows the diners to enjoy the exotic locales of these cities along with the scrumptious food.

Once upon a time when a person thought of the phrase ‘to keep someone in the dark’, the first thing that would have come to his/her mind would be ‘keeping a secret’. However, people across the world may now be humming a completely different tune. Many restaurants such as Dans Le Noir in London and New York and Dining in the Dark Restaurant in Beijing specialize in a concept where the diners enjoy their food in pitch-dark rooms, so that the complete focus is on the taste of the food and not its appearance. The guides working here either operate with night vision goggles (Dining in the Dark restaurant) or are blind (Dans Le Noir).

Who said a menu could only be meant for food? Calico Cat Café in Tokyo actually serves you a menu for cats!! You get to select a cat and then you can go ahead and choose your food and drink. The cats provide company to the diners (No, don’t think they are meant to be eaten just because there’s a menu involved :P), who come to drink tea. The 20 feline creatures at Calico Cat Café fill the abyss created by the inability to own a pet in this fast paced world, where one doesn’t get time for oneself, let alone the pet. The café is extremely popular with people of all ages, who are bound by their love for animals, and is a fast growing concept in Japan. People at Hachikyo, a restaurant in Supparo, Japan, truly appreciate all the hard work that goes into preparing a dish for the patron, and has therefore released an edict at their restaurant, whereby the patrons must pay a fine if they are unable to finish their tsukko meshi, a seafood dish. This fine is then paid to the fishermen who worked hard to catch the fish that was skillfully converted into tsukko meshi. Not only that, it is also a practice to not let the rice stir while eating the food, and the patrons also must sing along with the waiters when their food is served. The waiters sing songs that are sung by the fishermen community.

Remember Rosie, the robot maid from the Jetsons or the food spray from Phil of the Future? Although mankind may not be applying such technology of humanoid robots or for that matter any type of robots to their daily life, but the hospitality industry is making large leaps when it comes to technology. Hajime restaurant in Bangkok has 4 robots, which not only serve food but also dance for the customers. Baggers at Nuremburg, Germany has customers place their orders on virtual screens, and then the food travels down a long, winding track from the kitchen right to the diner’s table, making the concept of waiters quite outdated. Similarly, in Inamo in London diners place their orders through a 3-D menu. They can also find out more information about the local area and, select from a variety of virtual tablecloths. 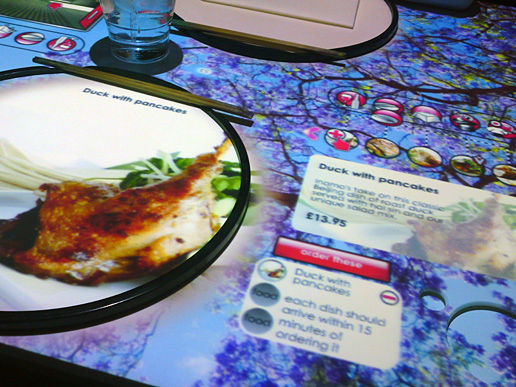 Famous literature, illustrious people, legends and the unknown have the ability to inspire many people to create films, music, and more novels. But more recently, there has been a spurt in the growth of theme- based restaurants. Innumerable themes such as gothic, sci-fi, literary, hospital, aviation have emerged, as far as restaurants are concerned. They provide an out of the world experience to the diner, not only through their décor, but also through the specially created dishes to suit the theme. NASA in Bangalore and Mars 2112 are two well-known restaurants that cater to the space theme. With waiters dressed in spacesuits (NASA) or as Martians (Mars 2112), and with high quality special effects, these restaurants create a feel of outer space minus the downsides of weightlessness and atmospheric pressure. Add some adrenaline to your dining experience, and what you get is absolutely unforgettable. Ninja New York, a ninja theme based restaurant, adds this very adrenaline rush to your meal. The eaters are guided down a subterranean tunnel where ninjas are hiding, and down into a dungeon, where the meal is served with a good dose of action. Horror too, seems to be an absolute favorite with restaurateurs, with restaurants like Jekyll and Hyde and The Slaughtered Lamb Pub, basing their themes on the classic book and a werewolf legend (smear the blood of a sacrificed lamb on doors to ward off the spirit of the werewolf) respectively. These places aim at creating a macabre setting using special effects and scary artifacts. Other restaurants such as Wizard of the Opera restaurant, Princess Heart restaurant, D.S Music Restaurant, A-380 In Flight Kitchen and The Exchange Bar cater to themes like wizard of the opera, princesses, hospitals, airplanes and stock exchanges(prices fluctuate according to the demand and supply of food and drinks) respectively. Necessity is the mother of invention, and people’s necessity for out of the box restaurant concepts, is giving rise to the ingenuity of restaurateurs. It is but natural to assume that the more these restaurants interest the populace with their unique concepts, greater the number of people will tend to flock such places. The Indian tourism and hospitality sector, which is already growing quite robustly could definitely benefit a lot more, if some unusual hospitality ideas come into the picture !

In my opinion, it is a revolutionary trend, which is causing people to break free from the shackles of a mundane eating experience, and affirms that the ambience also plays a major role in when people choose a restaurant to eat.

Brand Voice - December 2, 2022
December 2: “Commitment unlocks the doors of imagination, allows vision, and gives us the right stuff to turn our DREAM into reality”. JAMES WOMACK They...

Respecting the art of filmmaking and telling stories with passion is...